Yesterday morning I was woken yet again by another aftershock. This one was a 4.2. This 4.2 followed two that registered around 5.0 earlier this week. It is interesting how much you learn about earthquakes after going through one as large as a 7.0. The main thing I have learned is that earthquakes often come with a warning. A few seconds before the world starts to shake, you hear the earthquake coming. The noise is similar to the heater kicking on or an airplane flying past. So sometimes you experience that jolt of fear for no reason. Other times the noise is the reason you are woken at 6:16 am. Then you get to wait with bated breath for a few nerve wracking seconds to see how large the aftershock will be and whether or not your child will wake up crying.

Last winter I got to experience walking across a frozen lake and a frozen river for the first time. This excursion was followed by many other such trips. It is thrilling to see the lakes you have visited numerous times, while standing in the middle of them. I had hoped to venture out onto Mirror Lake for the first time this winter. This lake is known to be safe enough for even trucks to drive out onto it. However, the 7.0 earthquake that the Anchorage area felt on November 30th is the reason we will not be traveling out onto any lakes this year.

Let me make myself clear. It is not only the 7.0 earthquake that is keeping us from these fun little trips. It is also the 5,000+ aftershocks we have experienced since November 30th. This continued movement has caused additional damage to many properties in the area. Our church has measurements written next to the cracks in the women’s bathroom. I can only assume to see if any aftershocks cause them to continue to widen. I can’t image what it is doing to the ice in the lakes, but with a 3-year-old in tow and a new addition on the way, I am not going to find out.

In addition there have already been deaths in the area from unstable ice caused by the earthquake or the aftershocks. The bodies of two snowmachiners were recovered from Big Lake in late December. Shortly before this incident, two teenagers fell through the ice on the same lake, also while snowmachining. Luckily they survived.

I grew up in Southern Illinois, where you do not risk playing on ice. There is a new movie called Breakthrough coming out this year. This movie is based off a true story that happened a short distance from where I grew up. I remember hearing about the incident on the news when it happened. (By the way, if you watch the commercial for this movie it states that St. Charles, MO is a “close knit community where everyone knows everyone.” St. Charles, MO has a population of over 70,000 people. I know St. Charles because it has some really fun Christmas shopping, it had the closest Bass Pro to where we lived, and it is where the Ameristar Casino is location. Despite this lie on the part of Hollywood, I do still plan to see this movie.) This incident and many others have placed a healthy fear of frozen waterways within me. There is no reason to take unnecessary risks, especially when children are involved.

I was properly cautious the first time we explored out onto a frozen lake. I made sure I was with a group of people who had been in Alaska long enough to know what was safe and what was not. Last winter we mostly explored Reflections Lake, Eklutna Lake, and Eagle River. Reflections Lake has hot springs on one part of it. However, it is generally considered safe, as long as you know what area the hot springs are in and avoid them. Last winter we walked across Reflections Lake numerous times. We even found how fun the little island at Reflections is as a snow slide, and enjoyed looking at the frozen over ice fishing holes. 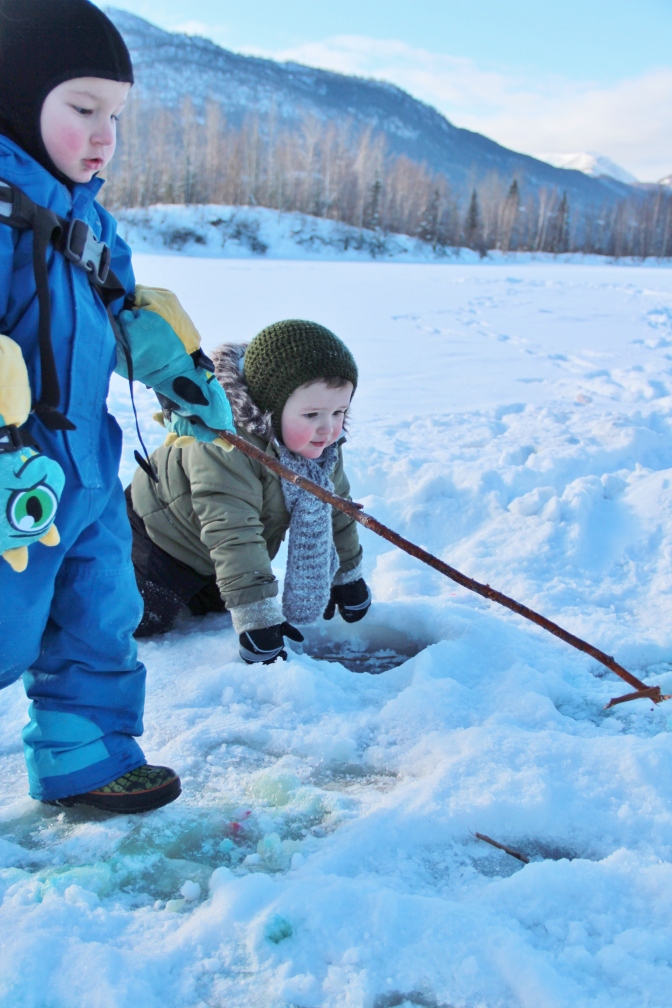 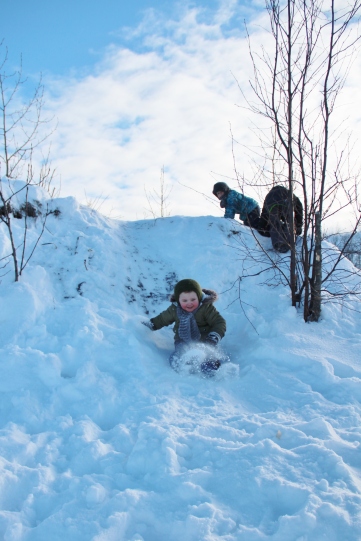 Eklutna Lake is much larger than Reflections, and even though it is glacial fed, as of late December 2018 Eklutna was not frozen yet. We explored frozen Eklutna Lake twice last year. It was absolutely beautiful. However, when we visited Eklutna the second time, in late March, there was evidence that some of the ice was unstable. In addition, one of our group (a dad) fell through some shallow ice over by the old Eklutna Damn (the ice was only a couple inches thick, so no real harm done).

We visit Eagle River at the Briggs Bridge access, North Fork Eagle River access, and from a trail by our house. It is fun to get to places on the river that we would normally not be able to see during warmer times. It is also nice that this location is so close to our home. However, I assume that rivers are more unstable than lakes. So I use extra caution when exploring on them. 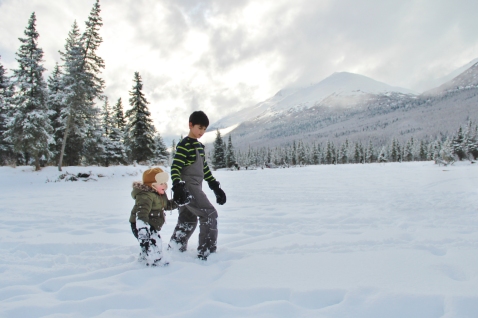 So, as you can see, even when there have been no major earthquakes, there are dangers when it comes to playing on ice. Even in Alaska. There is no way I am risking my life or the lives of my children just to do something that is kinda “cool”. I will just have to wait until next winter to go exploring on frozen lakes or rivers again.