Alaska is known as the last frontier. It is beautiful, and yet very dangerous in many ways. The largest earthquake to ever hit North America happened in Alaska in 1964 at a magnitude of 9.2. It is known as the Good Friday Earthquake or the Great Alaska Earthquake. This is the second largest earthquake ever to be recorded worldwide. In addition it is considered a mega-thrust earthquake. It is believed that Alaska has had 9 mega-thrust earthquakes over the last 5,500 years with an average time span of 630 years between each earthquake. The 64′ earthquake reworked the landscape of Alaska and, along with the two following tsunamis, took the lives of 139 people. Most of these deaths can be attributed to the tsunamis. 13 of these people didn’t even die in the state of Alaska, but from one of the resulting tsunamis that reached California! Thankfully the earthquake that Alaska experienced on November 30th, 2018 was not as strong as the earthquake experienced in 1964.


A week ago today, the area around Anchorage and the Mat-Su Valley experienced a 7.0 earthquake. I’ve got to say that this was one of the scariest moments of my life. I generally wake up early and I am lucky as Jasper is a late sleeper, usually not waking up until 9am. However, at 8:29am Alaska Standard Time, on November 30th, 2018 a 7.0 earthquake hit Alaska. Its epicenter was around 10 miles from our house. It is by far the largest earthquake I have ever experienced in my life.

I recently read that Alaska experiences more than 40 thousand earthquakes each year. This is more than the other 49 states combined. Obviously we have experienced a number of them since moving to Alaska in January of 2017. However, I would guess they have to be capping out at the level of around a magnitude 5. You get use to them. You may pause for a second when you feel one of these smaller earthquakes pass through, but you quickly pick up with what you were doing. At most the earthquake may knock over a picture frame and then your on with your day.

Last Friday morning I was sitting on the couch in our playroom, working on my laptop before Jasper woke up. I had a cup of (decaf, because of baby girl) coffee sitting next to me. I remember looking up at the open door to our playroom as the room started shaking. Initially I was thinking it was just another passing earthquake. Then suddenly I knew it wasn’t.

The lights went out. For most, at 8:30 am this wouldn’t be an issue. However, sunrise in Anchorage is currently at around 9:45 am. So the room went pitch black. There is a large shelf over the couch I was sitting on. I don’t remember getting hit by things falling from this shelf. However, nothing remained on this shelf when we went back later to the room to investigate. I honestly don’t know if my laptop was thrown out of my lap or if I threw it off of myself as I raced for the door to get to Jasper. Either way, my poor laptop now has coffee all over it. On the way out of the playroom I passed by two cube shelves full of toys. Just like the shelf that was over me on the couch, nothing remained on these shelves after the earthquake. However, I don’t remember getting hit by anything on my way out the door. I must point out that the next day I did find a few different bruises on my arms, so I must have been hit by something.

I sprinted to Jasper’s bedroom, just down the hallway from our playroom. To get to Jasper’s bed I would have had to pass his bookshelf. Even though this shelf is bolted to the wall, most of the items from the top two shelves of his bookshelf were knocked off of it during the earthquake. This included his lamp (which broke) and a large wooden box (whose lid also broke). Yet again I don’t remember getting hit by any of this while going to get Jasper or on our way back to the door of his bedroom.

I wrenched Jasper out of his bed to stand with him in his doorway. Glass was shattering in the hallway and books were falling everywhere. It felt like forever as we stood in that doorway, in the dark as our house shook around us. Not knowing what else to do I screamed for my husband, who seconds before must have been sleeping downstairs in our bedroom. He tried to get to us, upstairs while the earthquake was happening. He said once he had made it to the bottom of our staircase the earthquake ceased. It is a good thing he did get out of bed, because at some point our chest of drawers fell onto his side of the bed.

Once the earthquake stopped we went down stairs and outside, wrapping Jasper in my jacket on the way out. Presently I realized that my van was stuck inside of the garage because of the lack of power. Luckily we have a truck that we park on the street. I quickly transferred the car seat from the van to the truck and got Jasper inside the truck where it was warm. My husband went to make sure there were no gas leaks, water leaks, or major damage. Then he begins to get dressed for work. He is an Anchorage police officer and he knew he would be needed.

At this time I get into the truck with Jasper and as the first aftershock hits I am also hearing reports of tsunami warnings on the radio. Early this year we experienced our first tsunami warning. At the time I had no idea what I was suppose to do during a tsunami warning. After that occurrence I found that you are supposed to get to the highest ground possible. For us that is nearby Mt. Baldy. I quickly tell my husband that there are tsunami warnings and I head up the mountain with Jasper. Luckily, as soon as we reached the furthest we could go in driving up the road to Baldy, my husband calls me to tell me the tsunami warnings have been canceled for our area and we can come home.

Throughout the day I stayed tuned into the news for reports of damage in the area. The schools were filled with children at the time of the earthquake. I was terrified enough with my child being down the hallway from me. I can’t image what these parents who were not with their children went through. Anchorage schools are still closed and will not be opening again until December 10th. In addition, Eagle River Elementary school sustained enough damage that it will not be opened again this school year.


Most of the Anchorage library system is open again with the exception of the Chugiak-Eagle River Branch. It is closed until further notice due to damage. There were numerous rock slides along the Seward Highway. One of which did serious damage to a tractor-trailer. Vine Road in Wasilla sustained major damage. Briggs Bridge, right next to our house has been closed for days, though I believed it did open again late yesterday evening. The pedestrian underpass at Briggs Bridge has been crushed. There were initially a few fires and gas leaks. There are many businesses in Eagle River and the surrounding area that have major damage. A house a few streets over looks to have split in two. The over pass to the airport collapsed and the Glen Highway sustained major damage. However, despite these last two both having very serious damage, they both seem to be in working order now. 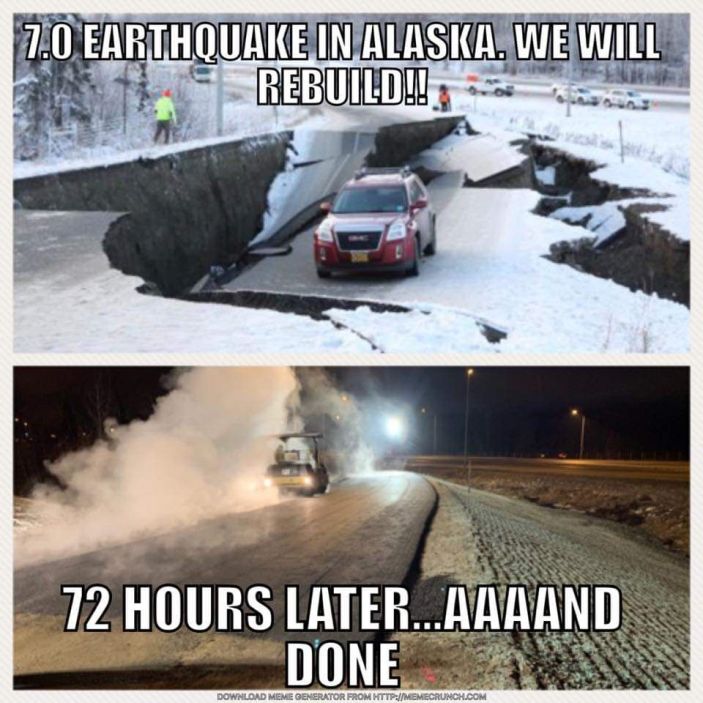 The water main near our house broke during the earthquake. From what I understand this contributed to the damage at Briggs Bridge. At one point during last Friday our water came out of the faucet black. I only ever heard of a precautionary boil order set by the municipality of Anchorage. However, with the water having come out black at one point and me being 6 months pregnant, I followed that boil order. Initially I was very concerned about water. For most of the first day we had no power to heat water and we had a limited supply of liquids at our house. Walmart is just up the road from our house so around noon last Friday I went to Walmart to see if I could purchase any water. The store was closed. However, they did have employees out front handing out what liquids they had left. They had no water but we were offered either a gallon of milk or a case of Gatorade for free. I chose the Gatorade and I do have to say it gave me some peace of mind knowing we had those extra liquids. I am very thankful for Walmart having provided us with those liquids free of charge. I have now been back to Walmart since they have reopened. I made sure to buy some water to have at our house in case of another emergency.

It wasn’t only luck that enabled Alaska to make it through this 7.0 earthquake with no fatalities. Since the 1964 earthquake, many precautions have been taken. The city of Anchorage has limited the height at which buildings can be built. In addition to centering it’s tallest building in an area where the ground is considered more sturdy and having engineers keep a close watch on the area, keeping an eye out for possible dangers and trying to stop any unnecessary risks. Yet, even with these precautions, when you look at earthquakes of similar size in recent years and you see the fatalities associated with them you can’t help but feel thankful that we got so lucky.

Between the initial 7.0 earthquake last Friday and Monday the 3rd, there were over 1,800 aftershocks recorded in the state of Alaska. 18 of which were 4.0 magnitude or greater. And believe me, the aftershocks have continued since Monday. Trying to get back to your normal daily routine with these aftershocks causing pause and waking you in the night has been a bit difficult, and very nerve wracking. On Thursday I pushed Jasper under our kitchen table for a 4.7 that I promise you felt way larger. Experts are saying that these aftershocks could last from weeks, up to a year. It will be awhile before we can go back to disregarding earthquakes like we use to.

The Wednesday following the quake my husband, Jasper, and I took a short hike from our house down to the river. On our way we passed the street where the house collapsed.  It was a bit unnerving seeing how close that street is to our house. I will be keeping an eye out for information as to why that house collapsed while all the houses around it sustained minimal damage. As I suspected, as we got closer to the river we found more and more earthquake cracks. They were amazing to see up close after viewing all the images on TV and the internet of the damage. 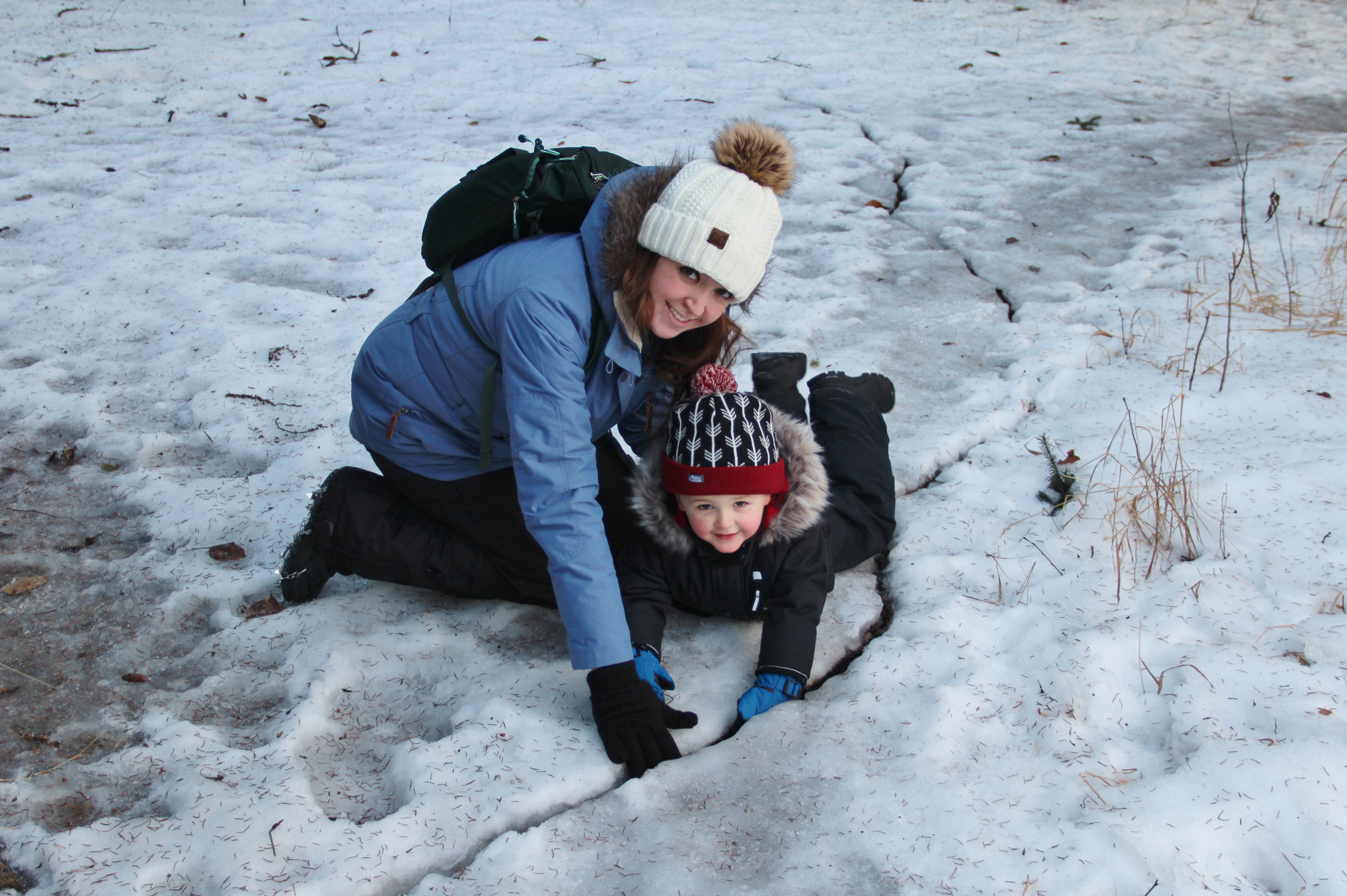 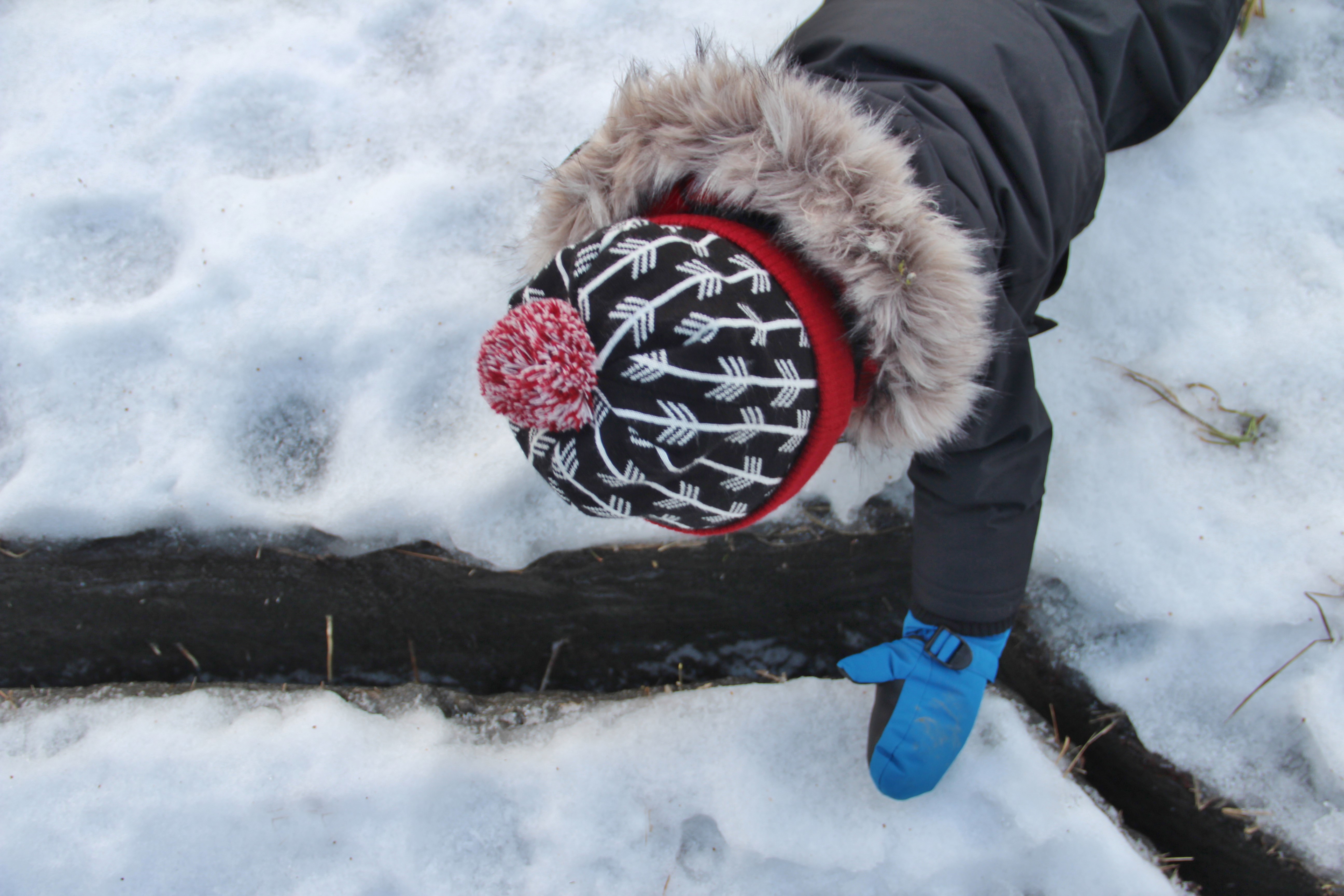 Overall the community has pulled together in amazing ways. There was no looting after the earthquake that you would expect to see in a major city with so much damage. In addition many businesses have offered their services for discounted or free. Later today we plan to take advantage of one of these offers and are going to visit the Anchorage Museum. They have offered free admission all this week! On top of all this, Alaskans have spread about some pretty funny memes and social media posts regarding the earthquake. Below you can find some of the ones that I enjoyed most.