Last week we visited Barbara Falls for the third time. Barbara Falls in located in Eagle River. I believe it is also referred to as South Fork Falls. This is a super easy trail and probably the easiest waterfall to visit in the Anchorage area. There is some elevation going up to the viewing deck. However, Jasper can walk to both the viewing deck and the bottom of the falls, and he is only two.

It is not difficult to drive to the falls.

However, I know I was confused the first time we pulled up and seemed to be in the middle of a neighborhood. Don’t park in circular part at the end. The city uses this sight as a fire engine fill sight and you will be towed. Make sure you park upwards of the no-parking signs. Also, be aware that there is very limited parking.

Directions: Off the Glen Hwy, take the Eagle River Loop Exit. In a short distance turn onto Hiland Road. Drive 3+ miles and turn left onto River View Drive. This will turn into Waterfall Drive. In less than a mile, turn right onto River Park Drive. The road will split at the end. Turn left onto Ken Logan Circle. Do not park in the circle at the end. Be aware of the no parking signs.

The first time we went in May of 2017, we joined a group of other moms on the short, half-mile hike up to the viewing deck. Be aware, the barrier blocking children from going over the drop-off isn’t great. I kept my hand holding onto Jasper’s hood the whole time. I was a bit disappointed that we couldn’t get closer to the falls from this point of the trail. I really wanted to find the tail to the bottom, but no one else in the group was up for it at the time.

As a family, we went back for a second time in mid August of the same year. We were intending to find the path to the bottom of the falls. However, when we got there we were very intimidated by the sings warning about a recent bear attack on the bridge. The trail head had a note posted that there had been a brown bear attack as well as a black bear sighted on this trail in the past three days.

Upon approaching the bridge we found that the bears were likely there due to the enormous salmon swimming in the waters below the bridge.

Right before the bridge we found what we thought was likely the path to the bottom of the falls. Though I really wanted to explore down there, the path was very narrow and surrounded by a large amount of shrubbery on either side. We did not feel comfortable going on this path with Jasper in tow, due to the recent bear activity. So we decided we should delay going to the bottom of the falls and we hiked up to the viewing deck instead.

Overall we were a bit on edge during this hike. Though we had been told that some of the tails  near by were closed due to bear activity in the fall, this was the first time we had come upon signs like this. This resulted in us getting thoroughly over excited when a bird took flight a few feet from us on our way up to the viewing deck. It was a nice hike, but I still felt that it would be a much better hike if we could go to the bottom of the falls, and not just look at them from afar.

Just last week we joined a Hike it Baby group and I finally got to travel down to the bottom of the falls! 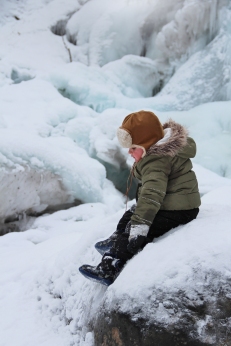 To get to the bottom, there is a small path that turns off to the right, just before the bridge. I am thankful that others had traveled down this path recently, because we were able to follow their tracks in the snow. Otherwise, I’m not sure we would have had such an easy time getting to the bottom of the falls. I don’t know what the path is like when you can actually view the ground, but we have plans to go back during the summer to find out!

The water could be seen running under and through large chunks of ice that had formed in the riverbed. The path took us winding over, under and around some pretty neat looking old trees, then up to the base of the waterfall. Most of Barbara Falls was frozen, but areas of rushing water could be seen through the ice. We climbed up as far as we felt was safe with a group of preschool-age children. Then we found a rock that the kids enjoyed using as a slide. They climbed up and slide down the other side of it for the better part of a half hour.

The falls were beautiful. Areas of the ice were colored blue and it was neat to see the rushing water breaking through. It was everything you would expect from a frozen waterfall. We will surly be returning in the summer to see it’s full (unfrozen) glory up close!

I am so glad I was able to visit the bottom of the falls during the winter. We visited Thunderbird Falls last winter, but again only viewed it from the viewing deck at the top. Thunderbird Falls is next on our list of winter adventures!

To see more of our adventures visit us on Instagram!